Do you have kids around in your home? If so, you may know that now the new generation is much towards technology soon after their birth. I mean to say that they start using smartphones and tablets even before speaking. We are in the age of technology, you know. For them sliding fingers and opening apps are easier than any old member of the family, isn’t it?  In this post, I will tell you about few great best kids games for android phones, that you can download for your kids. Some are silly some are informative. In my previous post, I have told about the best drawing apps for android  This list mainly focus on bit grew up kids.

Keeping this in mind there are many developers that are developing games for kids of all age groups. Android devices have a platform for the kids too and it is quickly growing. Kids have a big section to select from a variety of apps and games. let’s see what are the best kids games for android.

Angry Birds is one of the best kids games for android. When I was young, I was playing such game on the ground but now kids have android devices to play on. Bubadu is actually a developer studio and is releasing variety and a large number of games for kids.Doctor Kids 2 is their one of the best kids game.  When you have tons, for sure all, the stuff is not so good but they do have the best learning apps for kids that you must check. Not all the available games on android devices are developed for educating your kids but some are there to just have fun. The Cut the Rope franchise is nice series of games for the kids.

Price: Free and has app purchases too. Are you in search of some educational game for your kid? Then Endless Alphabet is best Android education app for your kid to learn small words with their meanings. This is my daughter’s favorite game. I like this so much as she is learning a lot of new words and their meanings. 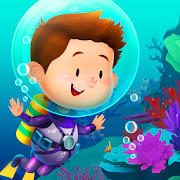 Explorium Ocean is fun teaching game for kids and it makes it the best Android game.

If I have missed any one of the best kids games for android let me know in comments down below.